For many years, I was planning to re-write in English my article about these very interesting ways of foreseeing major political developments in the world. Finally, that was accomplished! First of all, you'll probably prefer to read the article:

Barbault & Ganeau Graphs. How They Help Us to Understand Where We Are All Going

And then you can experiment creating these graphs for different periods of time with the help of a new online app:

An Unstable Middle of the Month

I believe the middle of January 2022 will be an unstable time, both in terms of weather and social situation. A few astrological factors will be hitting some painful points in the winter solstice chart.

First of all, Mercury will turn retrograde on January 14. It is quite common on such days (and a few days around them) to have various problems: with communication, transport, logistics, and simply silly mistakes of any kind. This time, however, Mercury will turn retrograde while being in a close square with Uranus. That square will not culminate this time, but for about five days Mercury and Uranus will be very close to it.

In astrometeorology, both these planets are associated with cold weather and wind, so I expect weather to be abnormally cold and windy in the middle of January, especially in the areas where either Mercury or Uranus will appear on an angle in the so-called "wind chart", i.e. an astrological chart created for the moment when Mercury will turn retrograde. Here is such a chart created for London, and you can see that Uranus is on the Ascendant in it, so we can expect an abnormally cold and windy weather in the UK. 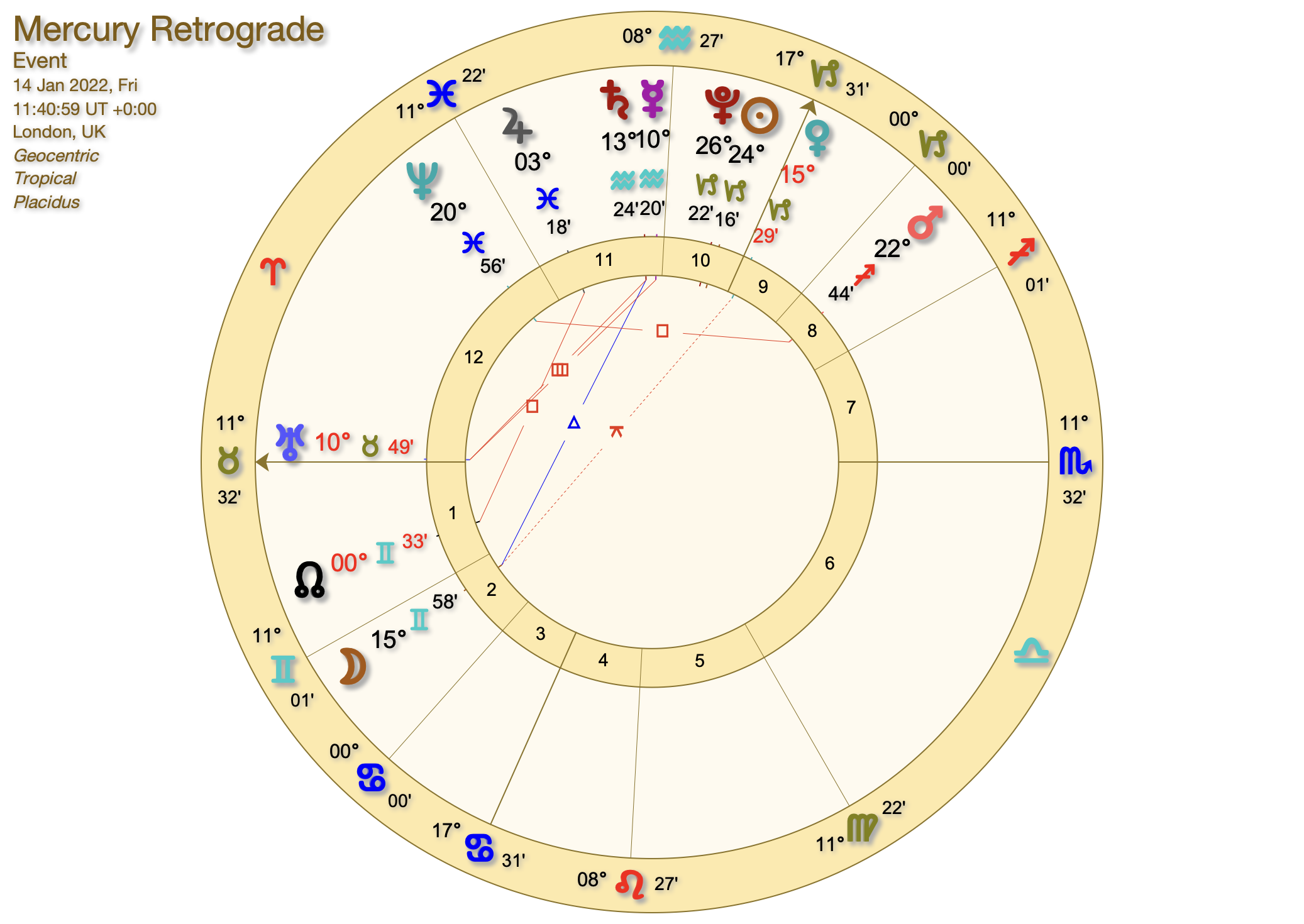 The IC is considered to be the most important cusp weather-wise, and In the USA we can see that Mercury on the IC line crosses Alaska while Uranus on the IC passes through Boston, as this Astro*Carto*Graphy map shows. 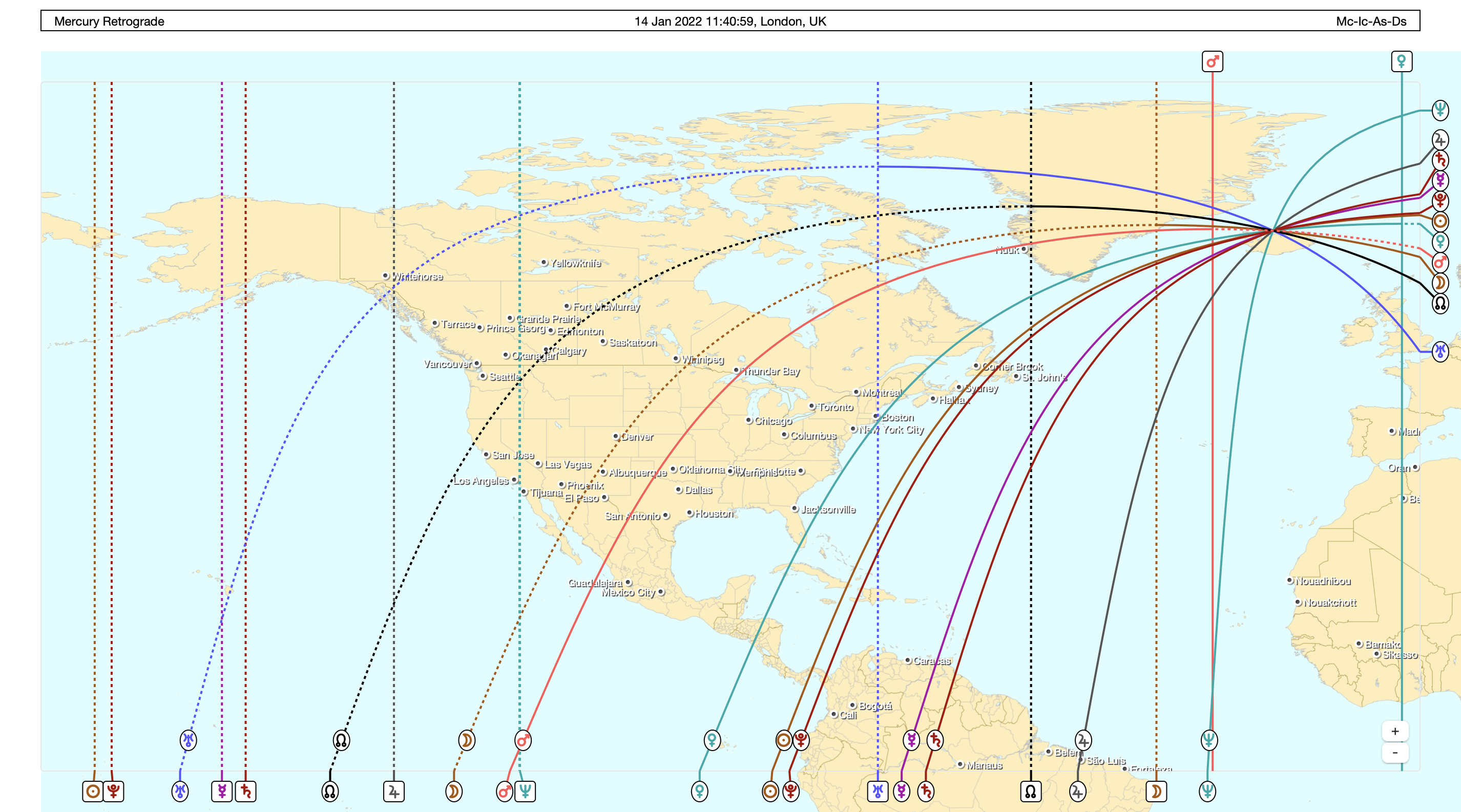 In Europe I'd pay attention to Mercury on the MC line passing through the Eastern Europe and Uranus on the Ascendant line over the UK and France. Venus on the MC across the UK, Eastern France and Spain could signal heavy precipitation. 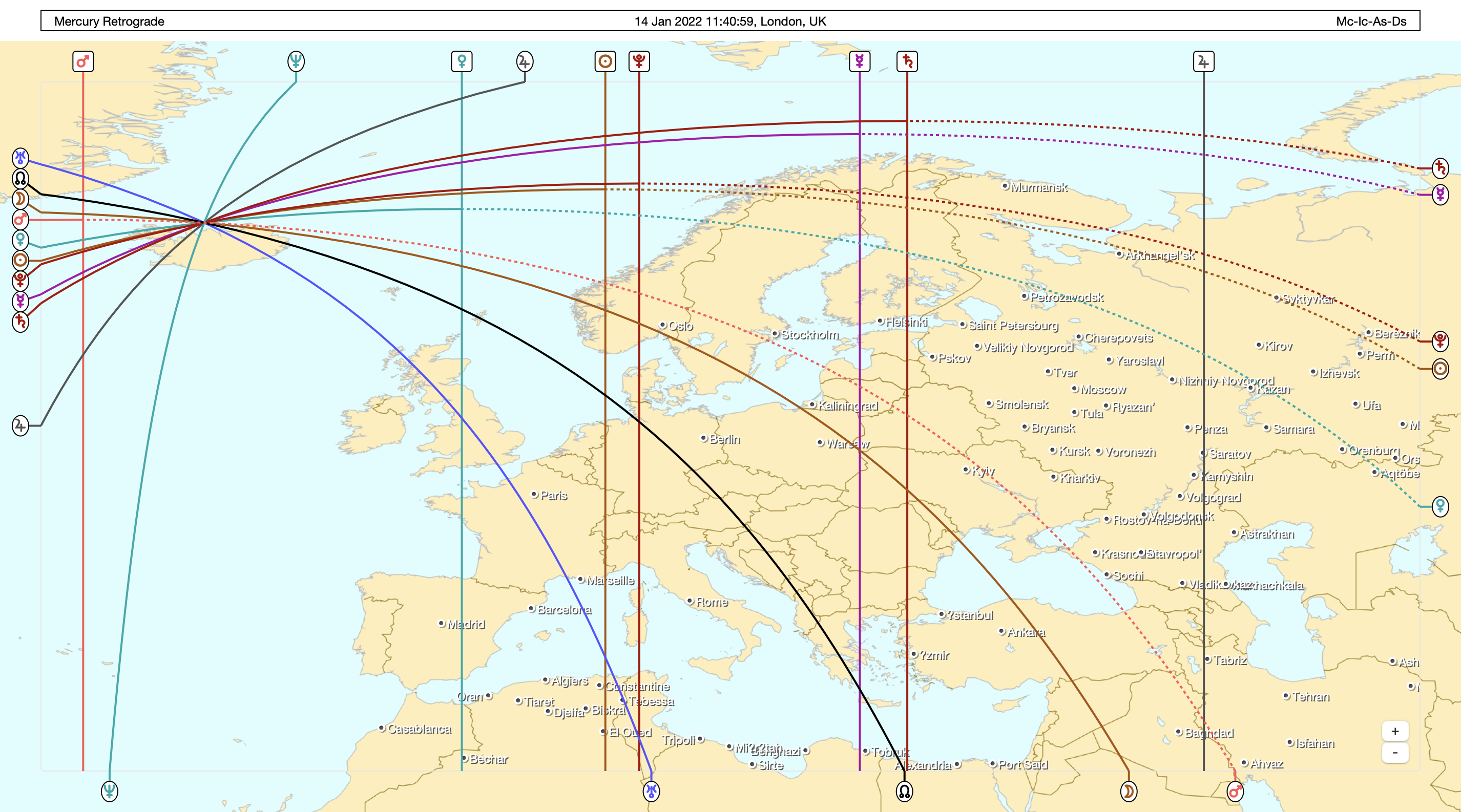 Returning to the problems of retrograde Mercury, I believe they will be more severe this time due to the square of Uranus. Computers and electricity systems can be especially vulnerable.

Another date to pay attention to is January 17. There will be a Full Moon on that day, and that Full Moon will precisely coincide with one of the most stressful configurations in the recent winter solstice chart, Moon in opposition to Venus and Pluto conjunction. There can be heavy precipitation during the week following that Full Moon, and it can be also very emotional in social life. To make things even more problematic, Uranus will turn direct on the very next day, and it will do that in a precise square to Saturn in the winter solstice chart. There is already a very precise Saturn–Uranus square in that chart, I call it a "lockdown aspect". This square from transiting stationary Uranus could revive that "lockdown aspect", so more restrictive measures can be introduced in the world. Here is the chart for that Full Moon cast for London, where the Full Moon will be close to the Meridian. 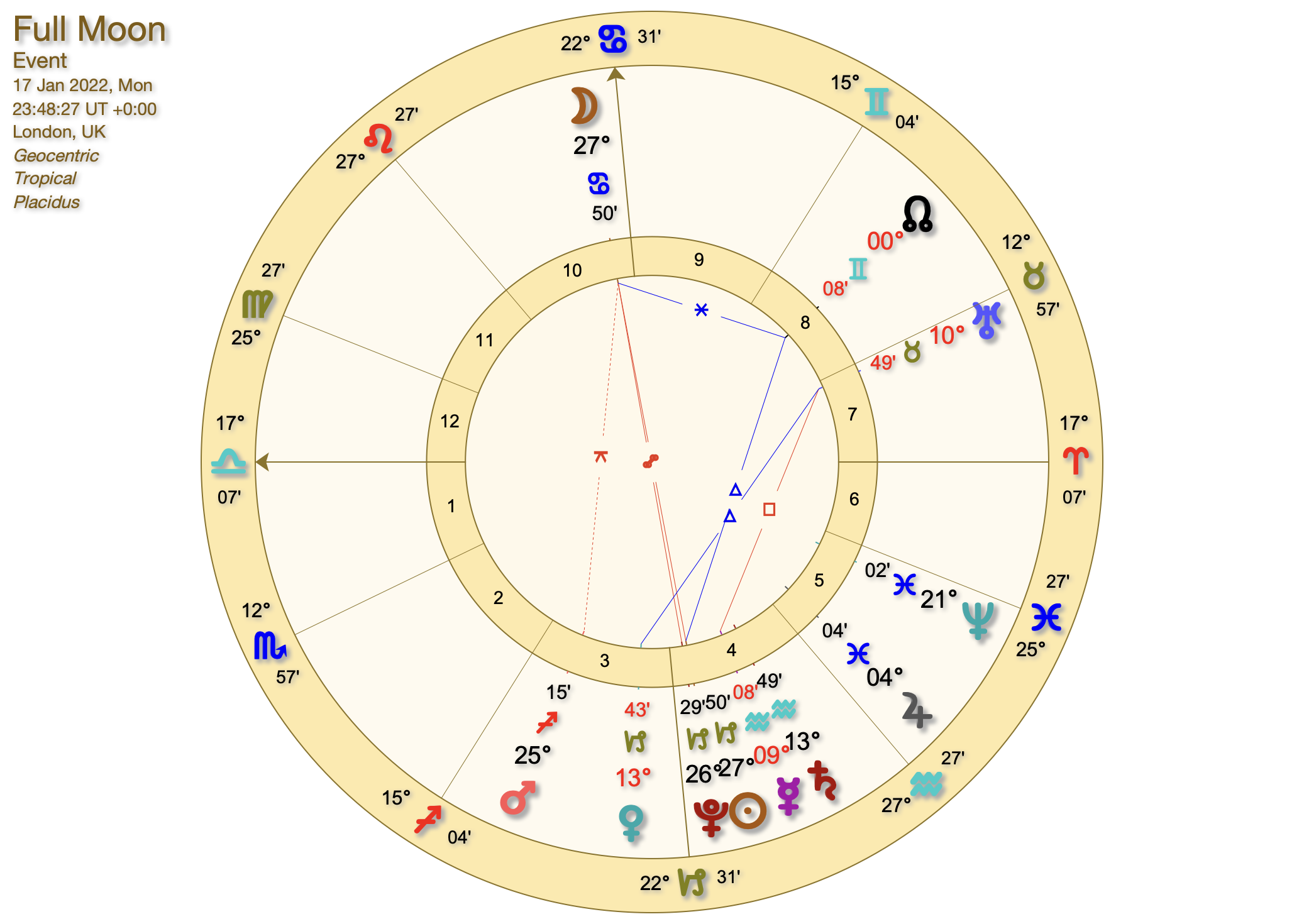 Precisely on the Meridian, as the ACG map shows, that Full Moon will be in France, Belgium, and the Netherlands. So these can be the places where the potential of the coming Full Moon will manifest itself in a most noticeable way. 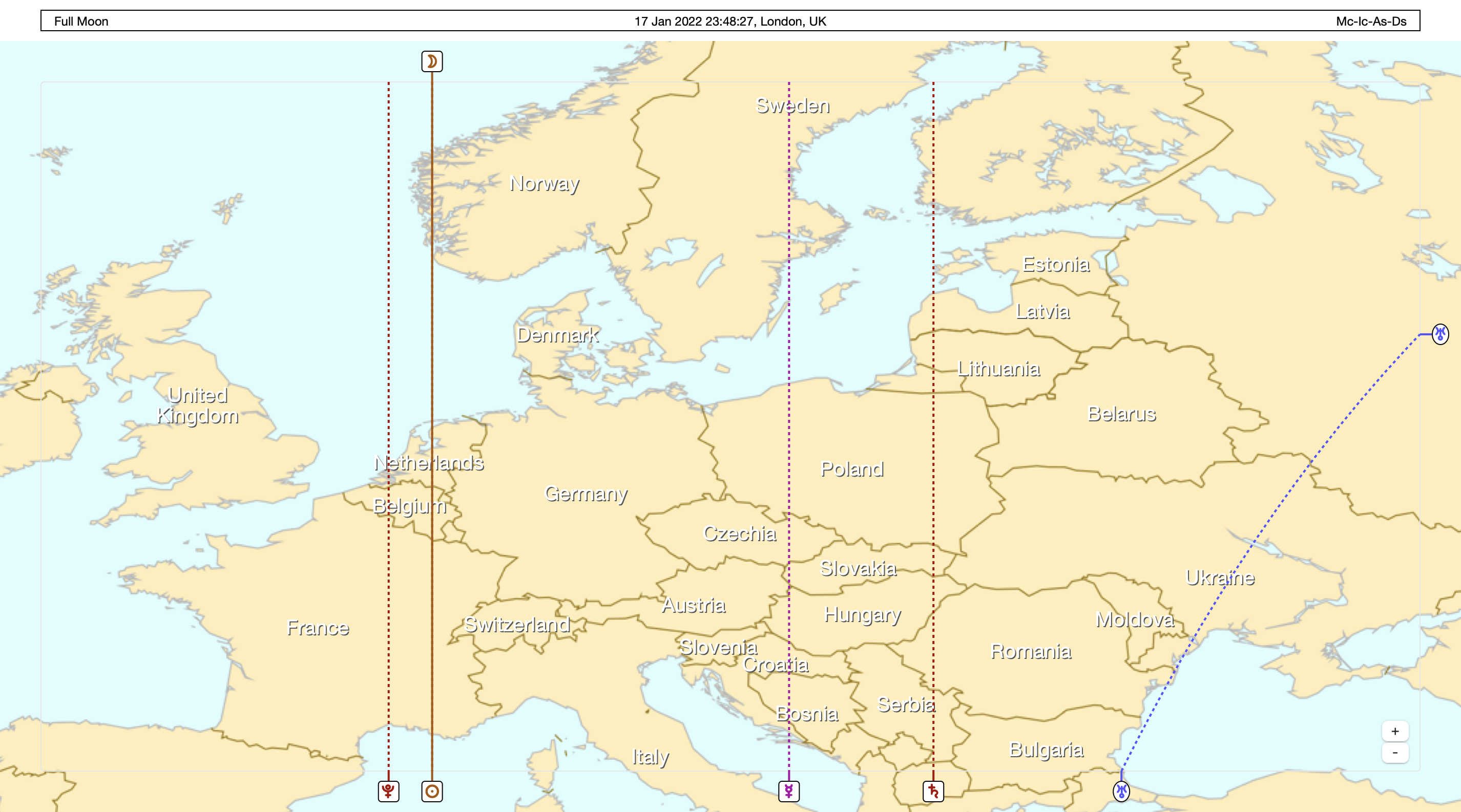 A New Channel for Lunarium News

To be honest, I'm fed up with email. It is very unreliable as a system for delivering messages, and it is becoming even less reliable every year. You never know whether the recepient will get the message, or it will end up in a spam folder, or simply disappear without a trace. And even if it does arrive, it can be easily buried in a pile of other messages.

And the pattern of communication is changing across the world. More and more, people are using chat apps for sending messages, making phone calls, even video conferencing. The most popular apps of this kind are widely known: WhatsApp, Viber. And my favourite, Telegram.

These apps indeed open for us a new era of messaging, and, to be future-proof, I created a Telegram channel for Lunarium News. Here is a link to it, if Telegram is already installed on your smartphone, tablet, laptop or desktop computer, my new channel will be opened in it, and you will have a chance to join it.

In the foreseeable future, I am going to keep sending my newsletters via email, but I will also be sending them via this new Telegram channel. But I do hope that one day I will say goodbye to email.

I am also planning to create a Telegram group where we can be asking and answering questions. We can even have a group video chat if there'll be something interesting to discuss.

So, please, if you are already using a chat app but not the Telegram, give it a try. And if you've never used a chat app, try Telegram. It's free, and it can be installed anywhere.