An important cosmic event will happen in about three days: a Jupiter-Neptune conjunction will take place on April 12, at 14:43 GMT. In fact, it won't be just a conjunction, the planets will also be close to a precise parallel of declination (the parallel will be precise on the previous day). (If you are not familiar with declination and parallels, pay attention to an announcement below.) So this will be like a super-conjunction. Some schools of astrology would call it an occultation, others — a "planetary eclipse". Let's also not forget that both Jupiter and Neptune will be in the sign of their dignity, so their impact on the world will, most probably, be very noticeable. What kind of impact that could be?

Many astrologers in anticipation of this conjunction wrote about a heightened spiritual awareness, mystical insights, idealism and generosity, and other such generally positive things. And they were correct in doing that, of course. Reinhold Ebertin wrote in his COSI book that the combination of Jupiter's and Neptune's energies is associated with the love of humanity, idealism, mysticism, interest in art. Michael Munkasey wrote in his Midpoints book that this pair produces "Expansiveness and wholesome joviality combined with confusion and neglect to bring an inner focus upon and/or elaboration of daydreams or visions... and a belief that goals and obligations can be explained away as you tire of meeting them".

Charles Harvey wrote in Mundane Astrology that Jupiter-Neptune cycle "has a strongly idealistic, humanitarian and ideological quality about it", and that it is related to the unfoldment of idealistic and religious belief systems.

I see this coming conjunction from a somewhat different viewpoint. Back in December, in Issue #130 of Lunarium News, I wrote about Jupiter's ingress into Pisces. I didn't like it: in the chart cast for Moscow Mars was exactly on the Ascendant, in a precise aspect with Pluto and in a quincunx with unpredictable Uranus. I also noticed that on the astrocartography map the line of Mars was coming not far from Moscow and then across the Ukraine. I wrote: "It looks to me like someone might be overly optimistic about their power, and keen to expand". Now we can see how it worked out: Putin got overly optimistic indeed and started what he hoped to be a blitzkrieg. That plan failed, but nevertheless Putin succeeded in the information war, in keeping a great part of Russia's population, and even some foreigners, under the delusion of Russia doing a good and necessary thing to restore its greatness. Using for this tightly controlled mass media, of course. So this is another way how Jupiter and Neptune can manifest themselves in Pisces: producing shameless but powerful lies that attempt to hide away even the most horrible of atrocities.

How could this pair of planets manifest itself in the near future? One possibility is that Putin's regime will attempt to somehow disguise the failure of his campaign, even if only in the eyes of Russia's population. But there remains other, more negative possibility: the use of chemical weapons, which is now often mentioned as a possibility in the news of the war. Perhaps as a provocation. In that case, the Jupiter-Neptune-on-the-Descendant line passing through Poland, Slovakia, Hungary and other countries might hint to us something. Or maybe some political scandal will happen there. 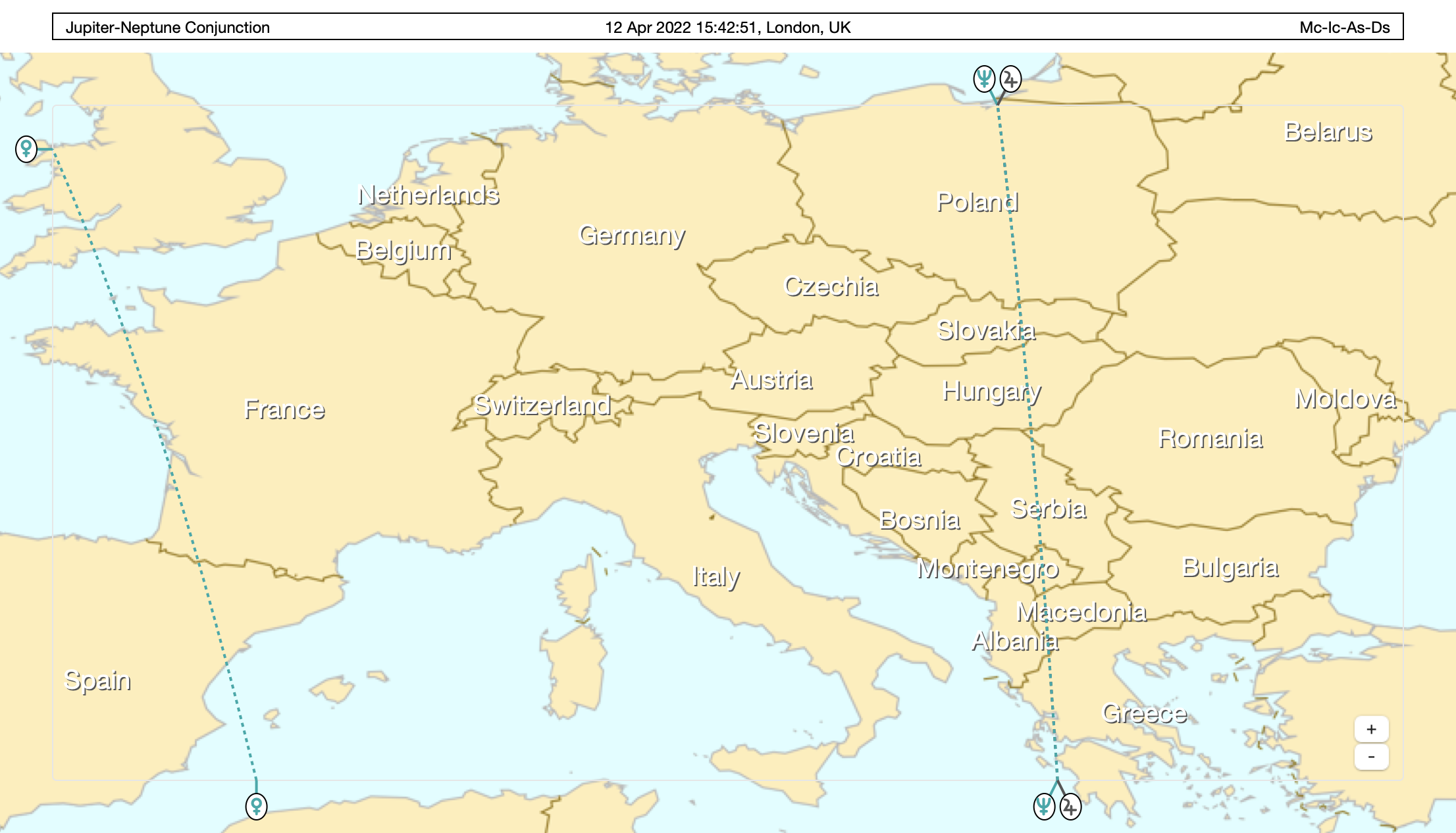 As for the timing of manifestations of this conjunction, they should be apparent while the planets are within a 1-degree orb from each other, which means from about March the 28th to about April the 18th. However, I also like the idea of a "time orb" which, as far as I know, was introduced by the Magi Society. According to it, an aspect will most likely manifest itself within three days before or after its culmination, no matter how slow or how fast is the aspect. So according to the time orb, the most likely manifestations of the Jupiter-Neptune conjunction are to be expected from April the 9th to April the 15th. 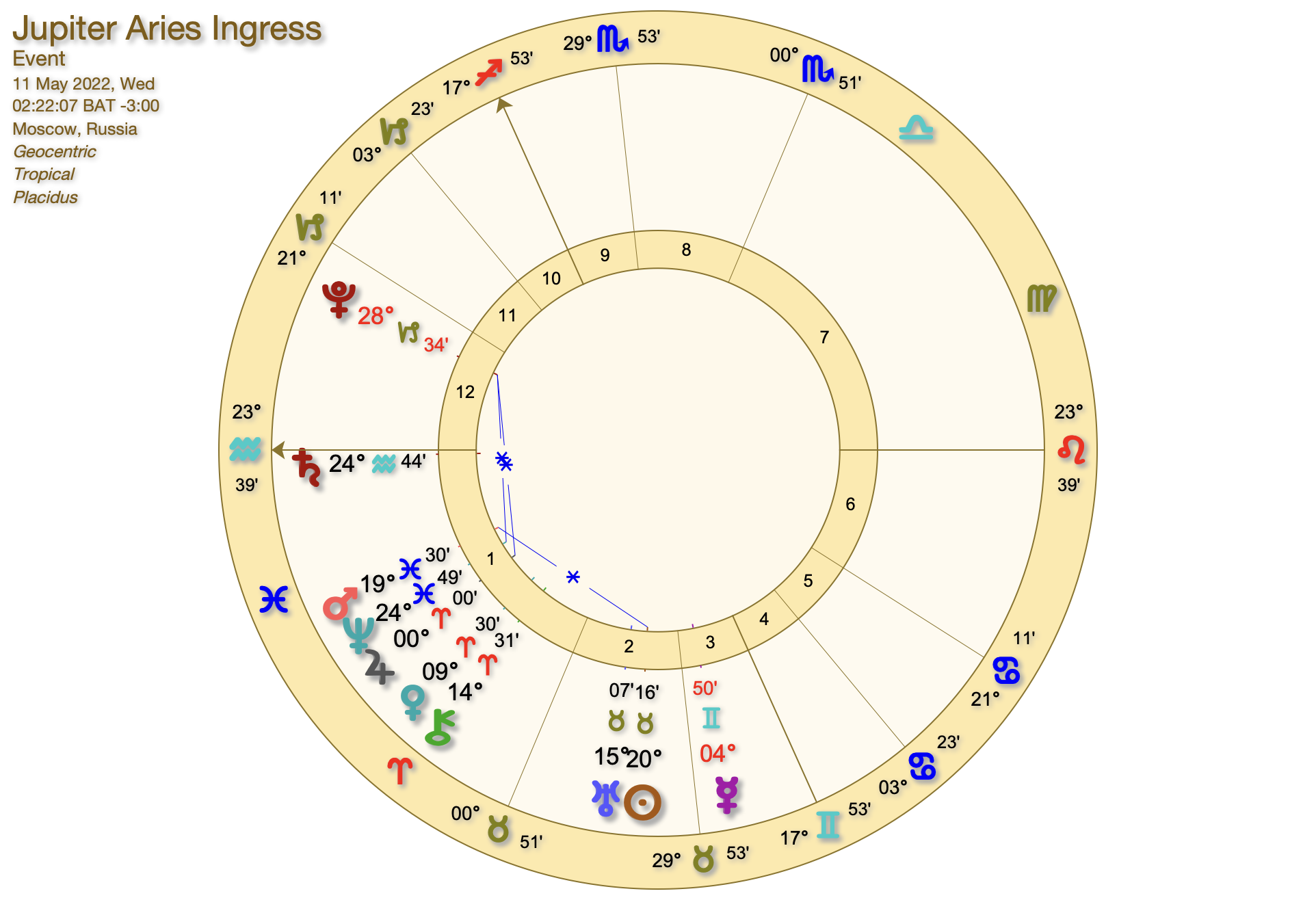 Again, a strong malefic, Saturn, is precisely on the Ascendant. It has no close aspects, which can symbolise Russia's isolation from the world, only a wide square with the Sun in the 2nd house, which can be showing economic difficulties, the consequences of sanctions. But this Saturn is still strong, and its line is again coming through Moscow and then across the Ukraine. It isn't an open aggression of Mars, but what? Destruction, a blockade? A failure to achieve anything? A checkmate? I am not sure, but it's still a malefic, and this line doesn't look good to me. 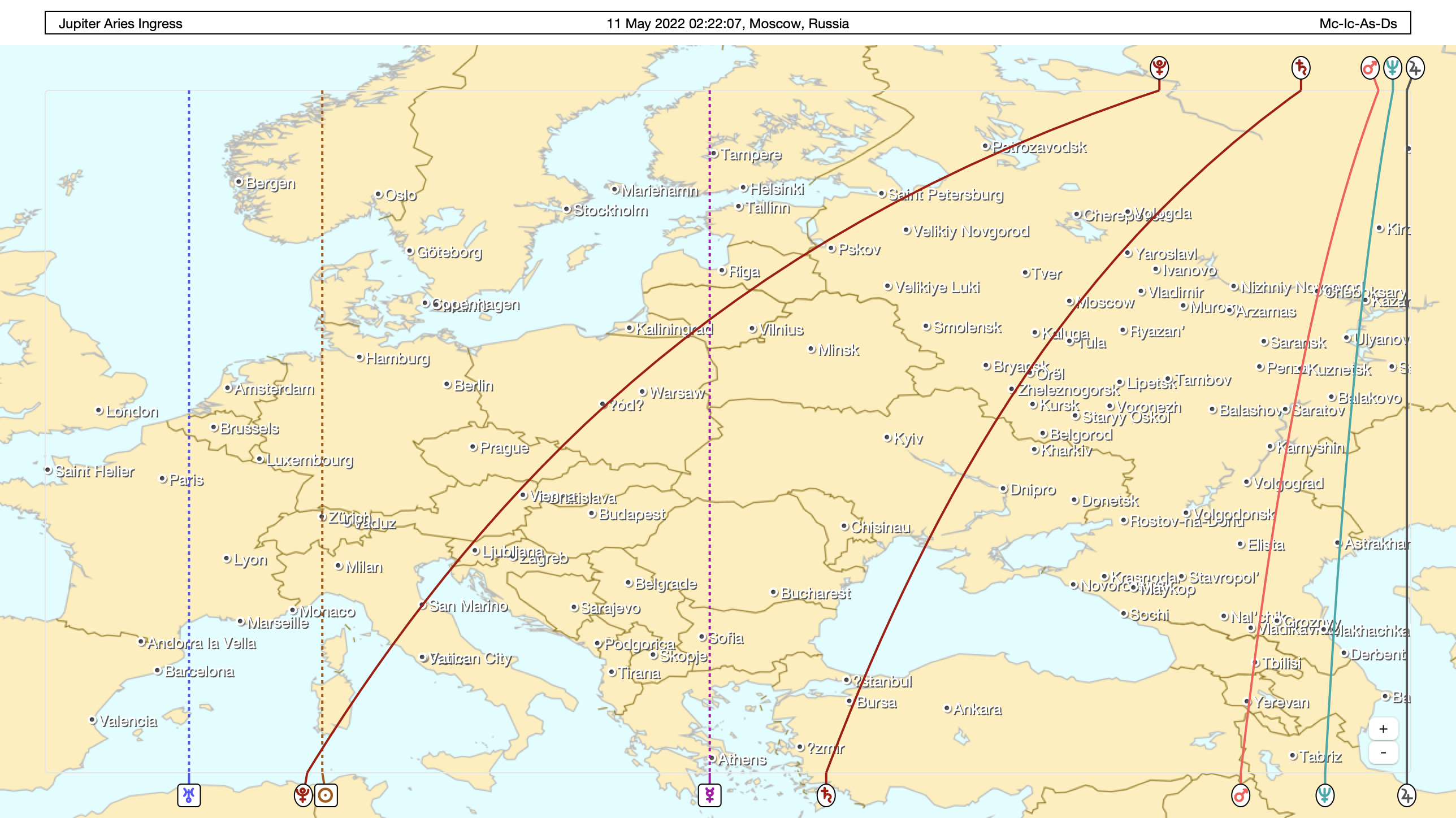 My Lecture at the Scottish Astrological Association

On April the 13th, at 7:30 p.m. BST I'm going to speak (over Zoom) at the Scottish Astrological Association. One of its members attended online my presentation on declination and the aspects of declination at the Astrological Association of Great Britain back in October, but the quality of the connection, and of the recording, was very low, so he asked me whether I could repeat the presentation for the SAA. I agreed, but it won't be just a repetition. I've also added material about out-of-bounds planets, which I haven't presented before, and about their possible mundane application. Here is a link with more details about the event.