A Cautious Overview of the Coming Jupiter Year

We are going to have a lot of Jupiter in the coming 2022! To begin with, Jupiter will enter Pisces just a couple of days before the New Year, and it will stay there for a substantial part of 2022. Jupiter is strong in Pisces, generous and expansive. It will be also close to the celestial equator for the most part of the year, which will make Jupiter very influential in the world's affairs. And, by the way, in the system of planetary years, 2022 will be the year of Jupiter! (Although planetary years start at the Vernal Equinox, around March 21). These should be good news. I do believe that any Jupiter year is more optimistic and lucky and happy, especially when compared to the previous year of Saturn (which 2021 is). Jupiter is the Great Benefactor of the Traditional Astrology, after all!

And yet something is telling me that we should be quite cautious in our expectations of what the next year will bring to us. One day I decided to cast a chart for Jupiter's ingress into Pisces. And I didn't like what I saw: in Moscow, Mars will be right on the Ascendant. 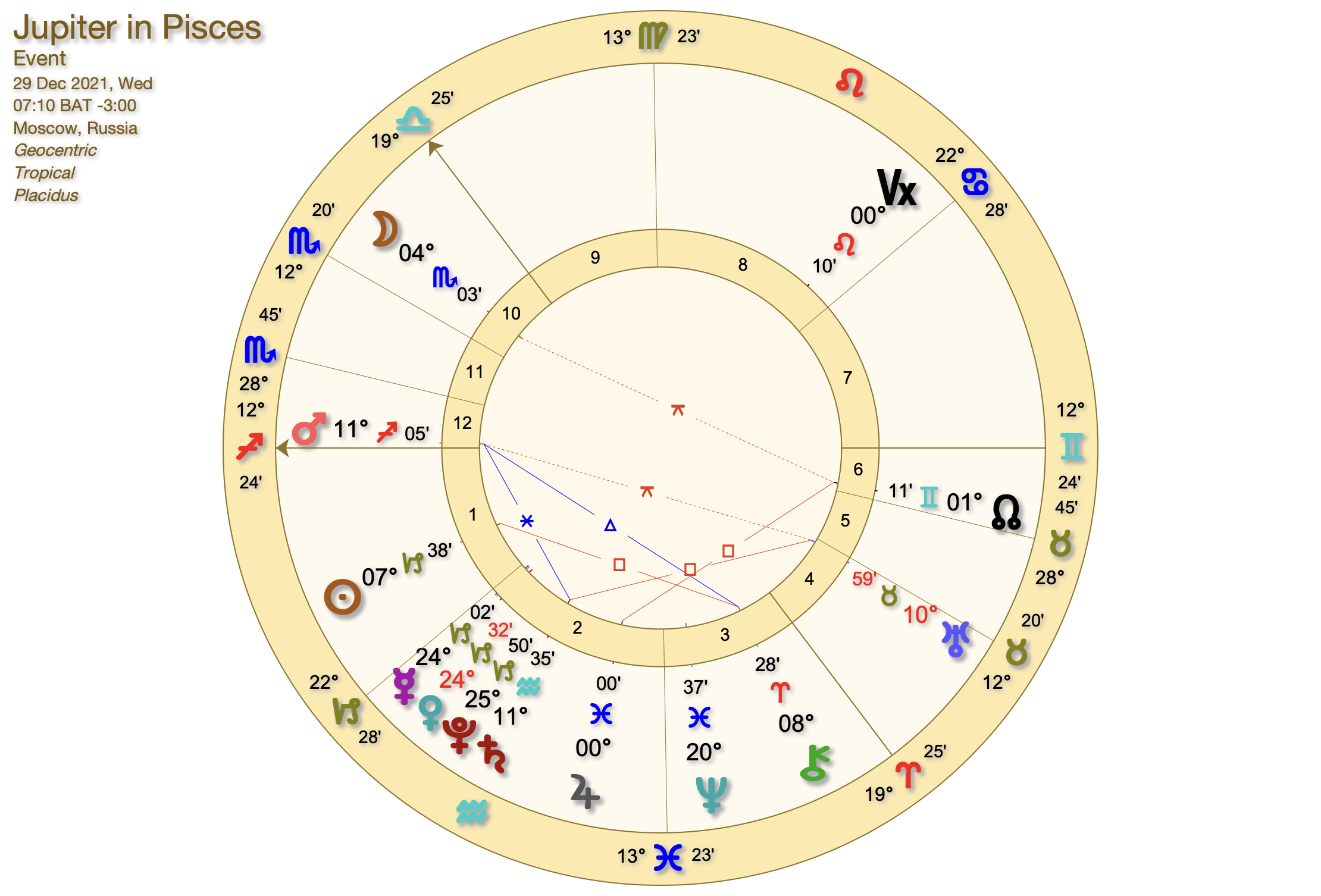 There's a lot of power behind this Mars: it's in a close applying parallel with well-aspected Pluto, and in a close quincunx with unpredictable Uranus. And when I created an astrocartography map, I noticed that Mars on the Ascendant line passes not far from Moscow, close to Kyiv, and then continues into the Eastern Europe. 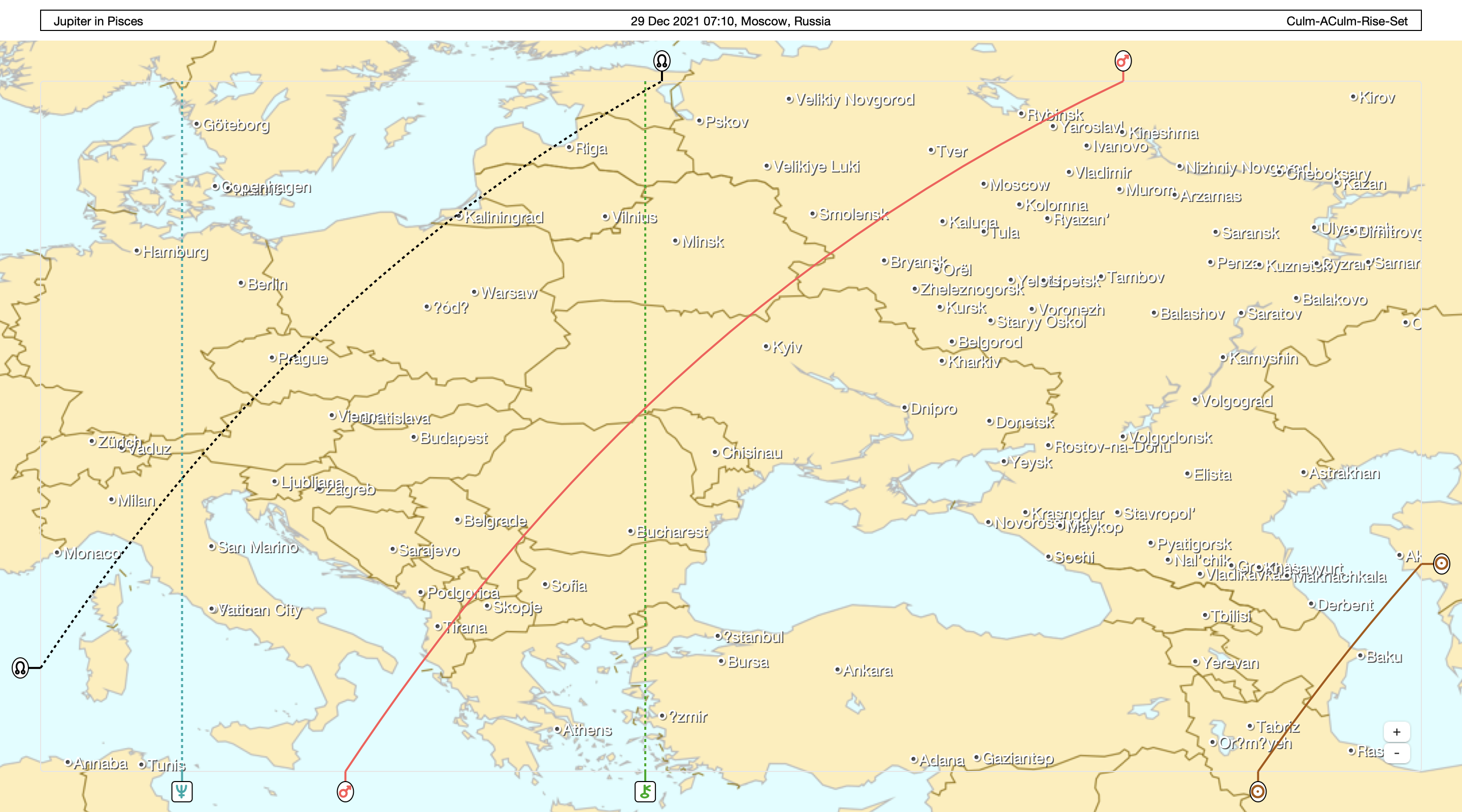 I recollected recent news stories about growing military tension between Russia and Ukraine, and I didn't like this Mars line. It looks to me like someone might be overly optimistic about their power, and keen to expand.

And then I noticed that there's going to be a lot of problematic Mars energy next year. That's because Mars will go out-of-bounds in January. Its first OOB period won't be long, January 13 to February 10. But then Mars will leave the Sun-controlled area of the sky on October 23 and won't return until May 2023. Such a lengthy period of OOB Mars is unusual. If I'm not mistaken, the latest period of comparable length was in 1986, the year of Chernobyl disaster.

And there is one more source of problematic energy which we are already experiencing now: the Saturn – Uranus square. I believe it is symbolic of all those restrictions being introduced all over the world, and since this square will remain in a close orb for a while, especially in the second half of the year, I believe that all those blocks and barriers won't go away easily. So we have a rather dangerous mix: optimism and desire to expand of strong Jupiter, OOB Mars, and the background of persistent restrictions and limitations. I still hope things will be mostly okay in 2022 — Jupiter is Jupiter. But the next year of Mars might be more problematic.

My Talks at the AA Conference

I've got recordings of my talks at the recent conference of the Astrological Association of Great Britain. The quality of the recordings isn't outstanding, but I believe they are still usable. Have a look:

A New Solution for Calculators

One of the challenges in my work on the new Lunarium website is to find a new technical solution for online calculators — the most popular features of the old Lunarium. These calculators should be easy to use and look good on both phones and larger screens.

I've just completed the first draft of the Moon Sign Calculator. Have a look, does it work for you?