To understand what the out-of-bound condition is, you nedd to be familiar with declination. If you don't know what declination is, you might want to read my other article, What Is Declination, and Why It Is Important

The Meaning Of "Out-Of-Bounds"

There is an area of the starry sky where the Sun travels through the year, day after day. That area is a wide band extending approximately to 23° 26' on both sides of the celestial equator. The Moon and the planets mostly travel within this Sun-controlled area of the sky, but occasionally some of them leave it by reaching higher declinations, North or South. The Moon can reach about 28.5°, Mercury and Mars — up to 27°, while Venus occasionally can travel as far as 28°. Steven Forrest believes that it doesn't matter what the declination is, as soon as it is over 23° 26', the planet is out-of-bounds, there is no gray area there. Although of course, logically, the higher the declination, the more noticeable should be the traits related to the out-of-bounds status.

It should be understood that when speaking about the Moon, it won't be out-of-bounds every year. The orbits of the Moon and the Sun are arranged in such a way that only during approximately a half of the 18.6-year long lunar nodes cycle the Moon's declination can exceed that of the Sun. The years with the highest declinations of the Moon were 1913, 1931–32, 1950, 1969, 1987–88, 2006, and the next such period will be in 2024–25. And again, not all people born in those years have an out-of-bounds Moon because most of the time, while it is travelling from the extreme southern to the extreme northern declination and vice versa, its declination is somewhere in the middle, i.e. it is normal.

Symbolically, this can be understood like the Moon or a planet leaving the well-trodden and controlled by the central authority (the Sun) path and disappearing in the dark forest. To do what?

Steven Forrest wrote about the topic in his brilliant article "The Out-of-Bounds Moon", published in The Astrological Journal in September/October 2012 (and I believe that the same ideas can be applied to any out-of-bounds personal planet):

The Moon is then, ..., out of the King's sight. No longer under Daddy's thumb. We might say that it has moved beyond the Pale. Gone out of control. Or gone wild. It has broken the rules. It has shattered the boundaries, broken the mold, crossed the Rubicon. Bravely, or drunkenly, the Moon has said, "Roll the dice".

Inwardly, the out-of-bounds Moon often correlates with feelings of being an outsider, of not fitting in, of not having a place in this world. This can be painful — and it can also lead to an attitude of not giving a damn. Or to passivity. Or to resentment. and to radical forms of existential creativity.

Steven believes that the Moon is the most dramatic of all the planets in its effects when out-of-bounds. I find that the out-of-bounds status of the personal planets (Mercury, Venus and Mars) is very important too.

Steven Forrest defines in his article nine typical manifestations, and gives many examples. I wholeheartedly recommend you to read the whole article. Here, for brevity, I will only list a few, the most typical categories, and mention some examples:

Some of the out-of-bounds personalities even managed to leave the Earth! The first Russian cosmonaut Yuri Gagarin is one example, and the other one is the astronaut Edgar Mitchell who visited the Moon and later took up psychic research.

Pamela Welsh wrote in her article Those Wild Out-of-Bounds Planets that was published in June/July 2001 issue of The Mountain Astrologer that out-of-bounds planets can signify extraordinary genius or point to volatile and aberrant behavior. Such people tend to know no boundaries and accept no limits. "Often, there's just no stopping them". This can result in boundless creativity and success, allowing the native to go way beyond the potential that one might normally expect. They can often achieve extraordinary things and overcome great obstacles in life. They are always stretching the limits of what is commonly accepted in society.

On the other hand, an out-of-bound planet's energy can indicate a tendency toward mental imbalance, or at the very least, it can create a lot of pressure and stress in an individual's life.

People with an out-of-bounds Moon, according to Pamela Welsh, are usually unique and very independent, they enjoy their freedom and solitude. However, they can be extremely sensitive, emotionally unstable and overwhelmed by feelings of doubt, guilt, or depression. Quite often, the out-of-bounds Moon reveals an overachiever who is unconsciously seeking success, prominence, or material security as a substitute for the love and attention that were not received from the mother during childhood. Contacts involving the progressed or directed Moon are particularly important for people born with the Moon out of bounds.

To interpret the effect of an out-of-bounds planet, Pamela Welsh advises us to consider the qualities and characteristics normally associated with the planet involved, and then think about how it might manifest if it were behaving in a very extreme way. For example, when Mars is out of bounds, its natural assertion and physical energy can either become violently aggressive or produce extraordinary courage and physical abilities. The alluring charm and aesthetic beauty of Venus can generate extremely vain indulgence or exceptional artistic talent.

As an additional interesting note, in Magi Astrology Mars in an extreme declination is counted among the so-called Super Sports Champion factors, so it can be a sign of a great athlete. They even state that the more extreme the declination of a planet, the stronger the benefits from this planet to the native.

The easiest way to find out whether any personal planets were out-of-bounds at the moment of birth, and whether any personal planets became or ceased to be out-of-bounds in secondary progression in 100 years since birth, is to use the free online Out-of-Bounds Planets Calculator. It is sufficient to know the date of birth of the person you are interested in. Say, Arnold Schwarzenegger was born on July 30, 1947. This screenshot shows a partial result of calculation for him: 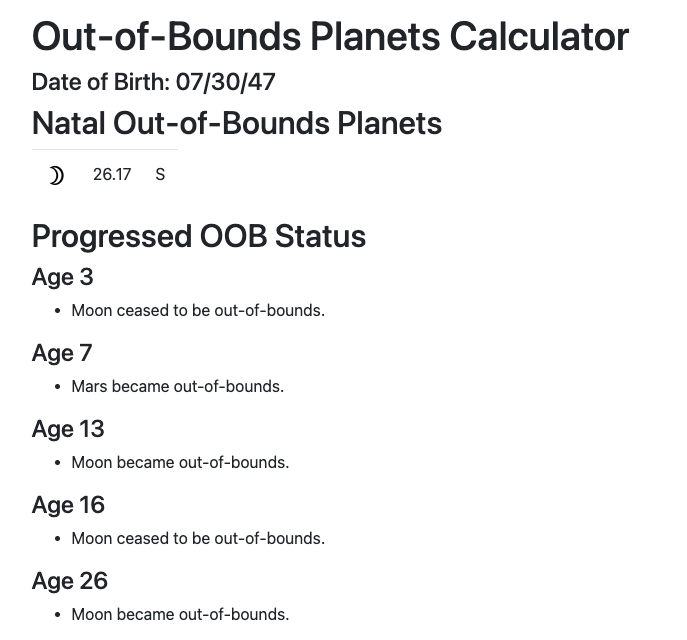 You can see that Schwarzenegger was born with an out-of-bounds Moon, but then through the years, in the secondary progression, the Moon was becoming, then ceasing to be an out-of-bounds planet, and there were other planets, like Mars at the age of 7 years, that were gaining the OOB status, then losing it. It is interesting to read celebrities' biographies with this information at hand, but it is a lot more interesting to compare the results of the calculations to the lives of those whom you know well — like yourself. I will share with you my personal impressions in the next section.

A Possibility of Discovery

I find that changes in the OOB status of personal planets can be a rich source of information for an astrologer. I will use myself as an example, that is probably the person I know the best. I was born with an OOB Mars (its declination was over 25 degrees). And in my youth I did something really weird that affected the whole course of my life. At that time, I was very interested in chemistry, which is quite appropriate for Mars in a Water sign — all those acids and boiling liquids. I was so good that I took the first prize at a chemistry competition organized by the top Soviet university, so a place was pretty much guaranteed for me there. Everyone would go to that prestigious university, if they could.

But that wasn't good enough for an out-of-bounds Mars, to go somewhere everyone would go. So I decided to choose a military career instead and went to a rather lacklustre military college. It was probably the age when my Mars returned under control of reason, ceased to be out-of-bounds, 21 years, that I finally realised that choosing a military career was the silliest thing I made so far. I also got married then, i.e. became a 'family man' rather than a maverick.

The other interesting point is that my progressed Mercury became out-of-bounds when I was 44 — that is when I did another weird thing, but this time a good one. I became a student of a Scottish university, perhaps the oldest of students there. But I enjoyed my studies, and as a result I had a chance to live and work in the UK for more than 12 years. My progressed Mercury is still out-of-bounds, it will return to normal only at the age of 69. I will then probably stop studying everything I can put my hands on, and start watching TV or wasting my time in some other common ways...

Have a go at the OOB Calculator, see what it will tell you, and if you'll be moved to share your story with me, I'll be happy!

My article "Forgotten Astrology: Declination and Out-of-Bounds Planets" was published by ISAR International Astrologer in April 2022. You can now download this article.